Trying to save my business while homeschooling

CEO at WeddingDates, Ciara Crossan featured on the currency to talk about how she home-schooled her twin boys as a single mother while running a business.

Read at The Currency

Weddings returning to pre-Covid-19 normality is not a priority for many, but Ciara Crossan is just as excited, if not more, as an engaged couple to see the easing of wedding restrictions. Crossan isn’t getting married, but she has made a business out of weddings.

Her company, WeddingDates, is a website that lets engaged couples compare wedding venues and look at the best prices before deciding where they are going to get married – like a Trivago for weddings. However, the company has had a chaotic 15 months as the pandemic brought their industry shuddering to a halt.

“In terms of the volume of clients that we have, we’ve been set back four or five years. We’ll have to build that back up over time”, says Crossan adding that revenue for the company has “fallen off a cliff.”

We were down 80 per cent. We’ve managed to gain some ground over the last 12 months as things gradually started to pick up, and I’m lucky in that half my business is based in the UK, as they opened up sooner and had a clearer road map from Q1 2021. So, I was able to gain some ground by bringing back some of the clients that had fallen off during Covid in the UK

Fáilte Ireland recently updated their Covid-19 guidelines to state that venues can have 200 guests at an outdoor function, but a wedding can only have 100. This number was 50 but in recent weeks increased.

This increase isn’t just good for Crossan and couples, but for others in the €750 million Irish wedding market, such as hotels.

“Couples have been put through the wringer, and staff in hotels, and wedding suppliers as well like small independent businesses such as hairdressers, makeup artists, musicians and bands, DJs, photographers. Their whole livelihood has been on the line,” said Crossan.

As the economy opens up more and more, Crossan is optimistic that Irish weddings could be back in full swing before the end of the year.

“The next thing will be to bring back live music. The bands, the musicians, and all of the artists in the event sector have been shut down for 15 months, so they need to get back to work. Also, for it to feel more like the wedding, the celebratory element. I think we do need to bring back live music and a bit of dancing. That would be the next step, and I think we’re all hopefully looking forward to that potentially in September or October,” she said.

Like all business, Crossan had to adapt to the ‘new normal’ brought about by Covid-19. “I’m self-employed. I’m a single mother. I was trying to save my business while homeschooling my twin boys. It was not easy,” she said.

She added: “We had to manage our own costs. Obviously, we availed of whatever government schemes are available, the rates waver, and the wage subsidy scheme. And we all pivoted to working from home.”

Crossan and her team offer more flexible payment plans than they did pre-pandemic, and they updated WeddingDates’s software so that it would help couples and wedding venues handle swapping and changing wedding dates during these uncertain times.

“Even though the hotels were closed, they were having to deal with so many phone calls and emails from couples who were absolutely panicking about their wedding. So their workload didn’t stop at all. It actually increased,” said Crossan.

As well as updating software, Crossan saw the pandemic as an opportunity to take the time she never had before to step back, re-evaluate her business and what it needs.

I know we’ve all suffered in various different ways throughout Covid, but a wedding is a really, really big deal in people’s lives…

It’s been really exciting to be able to take the time to strategise because I was on a plane every week over and back to the UK speaking at conferences, attending trade shows, networking with my clients. Whereas now we had the time to actually do that strategising.

“Certainly, there have been some positives as well. It’s given us time to work on some projects that we have been thinking about for a while and really look at how we can expand our business to be more robust in the future. We’re working with the local enterprise board on a feasibility study at the moment for some technical innovation that we’re doing and progressing then to actually do large-scale innovative project development, as an IT project, in the business over the next 12 months.”

This new project is currently looking for funding from Enterprise Ireland, so Crossan is coy about giving more details about it until then.

While there were no weddings happening, Crossan used WeddingDates to provide reports on couples engaged and/or getting married during Covid-19. This was done to get more insight into new wedding trends coming out of this crisis, plus to get a grasp on the impact the pandemic has had on mental health.

“I know we’ve all suffered in various different ways throughout Covid, but a wedding is a really, really big deal in people’s lives, a day that people spend a lot of money on, and some couples are postponing three, four, maybe even five times. And chopping and changing and rearranging weddings can be stressful in normal times, let alone in a pandemic,” says Crossan.

Thousands of couples were surveyed for the two reports produced by WeddingDates. The first took place in June 2020. People surveyed stated they were suffering from anxiety, lack of sleep, obsessively watching the news. Some even said they had panic attacks.

“We did see an improvement in the second report, which was published in January 2021. And those issues seem to be easing a little bit as we started to feel there is a little bit of light at the end of the tunnel,” says Crossan.

Trends that emerged from the reports signal a rising popularity in smaller intimate weddings, which would not have been too popular in Ireland pre-Covid, according to Crossan.

“The big traditional Irish wedding that we’ve all known, I still think there is a place for that in the future. I don’t think it’s gone away at all. And I think some people will hold out for the 200-person wedding and especially in rural areas where big weddings are really, really popular,” said Crossan.

I think post-Covid weddings are going to be tales of two halves. There will be the big wedding, but we’re going to see a lot smaller weddings.

Crossan has been in hospitality all her life as both her parents worked in hotels. Her mum’s family ran the Marine Hotel in Enniscrone, Co Sligo, and her father ran the Imperial Hotel in Ballina, Co Mayo. She later completed a degree in business information systems.

“So, it was the marriage of the two of them. The hospitality background and the technology degree and just seeing that niche in the market for people to plan their wedding online and to be able to compare hotels and venues and check availability,” says Crossan.

Crossan launched the company in 2008 and survived the crisis of the recession. Three years later, she created the UK offering to expand her business. Her business just hired two more people and has eight employees in total. 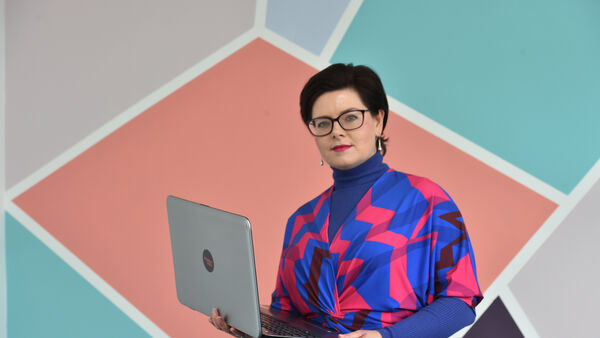