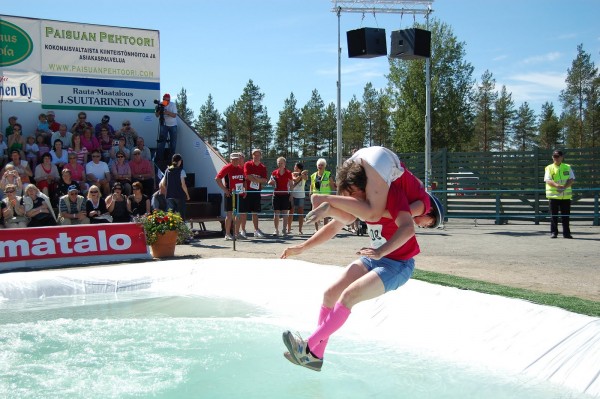 A group from Ireland have been touring through Europe for the past week to get to Finland for the Wife Carrying World Championships and are returning home this week after winning prizes in 2 out of the 3 races. Ciara Crossan and James Kennedy were at the Wife Carrying event last year and won the prize for the “Most Entertaining Couple”, which they managed to defend again this year, by running the race in a full wedding attire – top hat and tails for James and wedding dress for Ciara.

“That is the hardest thing you will ever do!” James gasped after carrying Ciara around the 250m obstacle course which involved a water obstacle and 2 hurdles.

After travelling across 7 countries in Europe for the past 7 days to get to the Wife Carrying in Finland, Crossan is thrilled with the win saying, “It has been an epic journey and we are so happy to be coming home with the trophy after all of the support we have had from home.” Crossan, who runs Irish website, WeddingDates.ie has been documenting the teams lead up to the competition, filming the road trip and uploading daily videos to www.weddingdates.ie/wifecarrying and the Irish public have really gotten behind the one Irish team in a World Championships this summer!

The WeddingDates.ie team also retained their title of 3rd place in the Team event which is essentially a relay race, with three “husbands” passing the wife as a baton. Despite incurring a 10 second penalty for an error during the passing of the baton, the Irish still managed to come in 3rd and were delighted to have a podium finish. The team consisted of James Kennedy, Ruaidhri Martin, Paul Keville and Ciara Crossan.

The Irish participants really embody the spirit of the competition with Anna Huttunen, the event organiser saying, “the irish have the right attitude, come to compete with athleticism and also have a lot of fun!”

The top prize of the wife’s weight in beer was won by a Finnish couple who were also last years champions. Taisto Meitinnen claims to train by carrying his wife everyday in the months leading up to the competition. Their time was an impressive 1 minute 2 seconds.

Anyone interested in trying their hand at one of the most unusual sporting events in the world can go to the Irish Championships in Sneem, Co. Kerry on the 24th of July. Champions for the last 2 years, John O’Shea and Aoife Desmond are the ones to beat with a time of 1 minute 12 seconds at this years race. Check out www.sneemfestival.com for more details.